Aggressive. Experienced.
Compassionate.
CONTACT US NOW For a Free Consultation 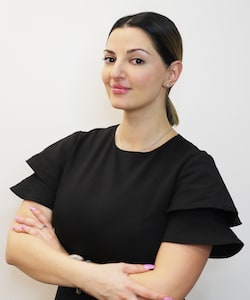 Alice Bagirova is a Washington state attorney practicing in King, Snohomish and Pierce Counties. She obtained her juris doctorate degree in law at Seattle University in 2014 and has been building her practice ever since. Prior to passing the bar, Alice: volunteered in a domestic violence clinic at Santa Monica's Courthouse in the state of California; she completed an externship at the Legal Aid Foundation of Los Angeles; worked through the family law fellowship program at East Side Legal Assistance Program (ELAP). For ELAP, Alice represented clients in family law matters and protection order hearings pertaining to Domestic Violence.

Alice’s professional focus is in the areas of family law, personal injury, traffic tickets, and DUI’s.

She has been an active participant in an array of different organizations in Washington.  For the last three years she served on the Washington Young Lawyers Committee created by the Washington State Bar Association. Alice is currently the vice president of the East King County Bar Association, and a board member of the International Families Justice Coalition.

In addition to English, she is fluent in Russian. When not working Alice enjoys hiking, traveling, and spending time with family and friends.
Education

International Families Justice Coalition Board of Directors
Member Since: 2016

Contact Us
Practice Areas
Client Reviews
★★★★★
Thank you, Northwest Law Group and Alice, our wonderful attorney, for making us feel heard. You clearly care about your clients, and I cannot thank you enough for your urgency in finalizing the case in a way that was the most beneficial to me and my kids. My children are in a stable home now and we have been able to move on, all thanks to you, Alice and your firm. - V.P
★★★★★
When I received the divorce papers from my husband, I was extremely worried and didn’t know what to do. I found Alice and Northwest Law Group through a friend, and just after my first meeting with Alice, I felt as though a huge weight had been lifted off my shoulders. She explained everything to me and continued to do so as she represented me through the conclusion of my case. I don’t know what I would have done without Alice! - Z.B
★★★★★
I just want to thank Northwest Law Group, PLLC. for being professionals in handling my DUI case. I made a huge mistake when I got behind the wheel of my car after a night of drinking. Thankfully, you were able to help me work through the confusing court process, ensuring that my mistake didn’t end up costing me time at work or with my family. - Anonymous
View More
Submit a Law Firm Client Review